A month ago the "Satellite images updates list" tool has been launched. Since that moment we’ve been watching its functioning and analysing what more should be done. Today we made a revision of the tool to improve its work and would gladly see your comments.

What’s new:
- A user can draw one vector for each overlay zone only.
- At least 4 users needed for a map shift to be done (or its cancellation).
- To prevent a mistaken shift, the system will decline those vectors that differ significantly from others (e.g. if it has the opposite direction).
- If a user has drawn a vector or marked that this part of the map does not need any shifting his username will appear in a special list at the right top corner of the page. This can help figuring out why a map shift was accepted or declined.
- If you add a shift vector of your own, you’ll be able to see what directions other users marked.
- The system will also report how many vectors are still needed to confirm (or decline) the shift. The more users mark correct vectors the less users will be needed for confirmation and vice versa.
- For drawing every shift vector (or choosing “yes, its fine”) a user gets 200 points.

A tool to handle Satellite images updates: "Map Shift"
For those who don't know what is this about - a short introduction: every month or so Google updates their satellite imagery and sometimes as a result of it this outline positions of Wikimapia objects in some areas become out of sync. This is an example of how it may look like: 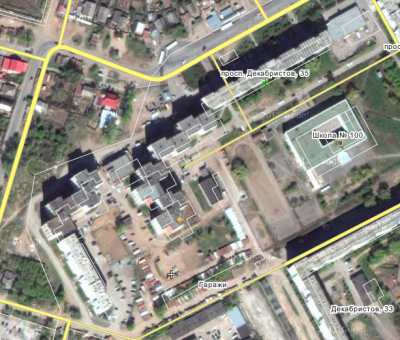 Such areas need to be fixed. To avoid doing this for each object individually, we have designed a special tool, which allows simply to update the whole areas, where this problem occurs.
You may be familiar with it, it is called "Map shift" and is accessible from the user tools page in the top menu or user profile page and via direct link: http://wikimapia.org/#m=b&show=/user/to ... /status=0/ .
Now we are releasing a new version of it and making it available to more users than before.

How it works:
The tool provides a list of areas, where the satellite imagery was updated. Most of the outlines of these areas are imported automatically from the data published by Google, so naturally not all of them have actual problems, some imagery updates are fitting perfectly well . There are also problematic areas in this list that are spotted and marked by our users. Every area in the list needs to be verified by several users in order to fix it or leave it as it is. If the outlined area has a visible gap between Wikimapia objects and satellite photography in it, you can set a direction and distance of shift required to put them back together. If not, you can confirm it by simply pressing a button. You can also add an area yourself, if you are sure it is not contained by any other listed there.

After the area has been verified by sufficient number of users, system automatically calculates the average values and some statistics and decides whether objects in the area should be updated and how.

Unlike the two previous versions of this tool, the new one doesn't need advanced users to sign the shifts and Wikimapia team to finally approve them. All the shifts are being processed by the system automatically and carried out in background, so you can check their status using the filter in the satellite images updates list.

We have completed work on the new category system (with hierarchy, synonyms and multi-language support), which will be filled and maintained by the community. It's running in restricted mode now (for example, users can't create new categories).

In order to run with full functionality, it needs the complete hierarchy structure of the current categories to be built and this means more hands are needed. You may apply for “Categories Moderator" status here if you think it's your calling and you can help us with:

- organizing the category hierarchy
- moderating new categories created by other users, when the system is fully released

All detailed information about the new system, users' and moderators' guidelines will be posted later.

We are in a process of updating Wikimapia code to make sure it will be working well with Google Maps. It’s necessary update as Google marked as deprecated their version 2 of Google Maps API and encourage all developers to change the code to work with version 3.

As the essential changes affect all Wikimapia features you are possibly using, expect some minor bugs to appear shortly, don't be confused, post them here: viewtopic.php?f=4&t=9548 so we can fix them quickly.

Today we are upgrading our systems to make all linear features better. It is the first step which only affects roads and railroads. A large part of the upgrade will not be noticeable right now, but it shall give us an opportunity to introduce new types of roads and railroads in future steps. For now, here are a few changes in the interface of linear objects:

Today we have completed an upgrade of the Status Grid which connects it with the watchlist feature - now the number of unapproved history revisions are shown in the Grid. This feature will help you find unapproved edits and save your time by not having to check approved ones.

You may look at the example of the Status Grid here

The new feature has no effect on the Status Grid cell color or factor, it only helps you to find and count objects that were edited recently. All old history revisions have been automatically approved to save the category layer from lots of unapproved old (and good) objects. As usual, if you are the first to approve the revision, you will get 10 experience points for this action.

Hello, Wikimapians!
We are continually working on our photos system and today we present the improved photo galleries on both overlaid and full screen object pages, and cityguide. In addition, a new feature has been released - comments to photos which could be used to describe or discuss each photo. They are organized in the same way as comments for places.